What Is Sleep Apnea?

Apnea means not breathing. An apneic episode is an episode where someone stops breathing for a short time. Sleep apnea is a condition where a person has many episodes during the night where they stop breathing for a short time. This causes their oxygen levels to drop which in turn causes them to wake up just enough to unconsciously take a deep breath to get their oxygen levels back up to normal. The most common type of sleep apnea is obstructive sleep apnea. This occurs when there is an obstruction to air flowing down through the nose, mouth and throat into the windpipe and is often accompanied by loud snoring. Non-obstructive sleep apnea is a less common variant which can occur due to problems with the central nervous system areas which control breathing. In either case the result is a decrease in airflow which causes low blood oxygen levels.

The Stages Of Sleep

When we sleep we progress through several stages of sleep ranging from light sleep to very deep sleep. One of the more important stages of sleep is called REM sleep. REM stands for rapid eye movement and is so named because it is the stage when we dream. During REM sleep our bodies are automatically and naturally paralyzed such that we don’t actually move around, acting out our dreams, even though they seem very real at the time. The only voluntary muscles which are not paralyzed during REM sleep are those in our eyes. Our eyes move back and forth rapidly as we “look” at all the things taking place in our dreams. While the exact purpose of REM sleep and of dreams in general is still the subject of much research and debate, one thing is clear – it is very important to the restfulness of our sleep. If we are deprived of REM sleep, we will not feel rested. And the effects can accumulate over time, resulting in chronic fatigue, anxiety, irritability, and many other symptoms.

When we begin to sleep we drift through the stages, from lighter sleep to 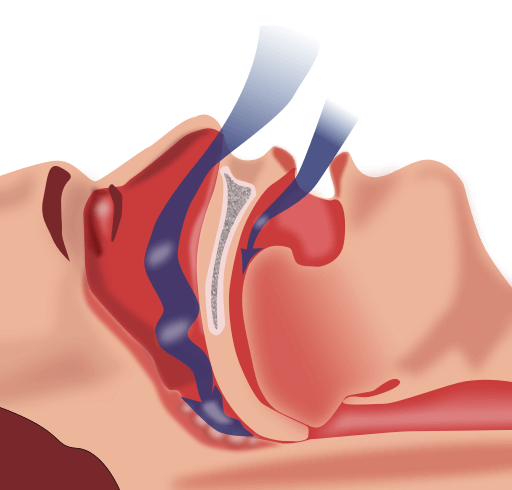 deeper sleep. When an apneic episode and corresponding drop in oxygen level occurs during the deeper stages of sleep, including REM sleep, our bodies are stimulated to wake up just enough so that we can take a few deep breaths to get our oxygen levels back up to normal. We don’t wake up all the way, but just to the lighter stages of sleep where our breathing muscles are able to take a deep breath. This causes a person to keep cycling from deep sleep to lighter sleep and back again. In severe sleep apnea this can happen hundreds of time every night. And because the person never actually wakes up all the way, they do not realize what is happening. When they wake up in the morning, they will have no recollection of ever having been woken up out of deep sleep to a lighter stage of sleep. They will think they had an entirely normal night’s sleep. Except that they will still feel tired. Why? Because they never had the chance to complete a full cycle of deep sleep or REM sleep. In a normal night, a person will pass up and down through the sleep levels slowly, and will often complete three to four full cycles of REM sleep. With sleep apnea, those normal cycles are interrupted because every time the body finally gets deep enough in sleep to begin a REM cycle, the person gets woken back up to light sleep because of an apneic episode. Then they have start to process all over again, getting back to deep sleep, where they are again woken up, again missing the chance to compete a normal sleep cycle. Thus they can end up sleeping all night without ever having had any satisfactory deep sleep. This may not be felt or known by the person but can easily be seen on a sleep apnea test.

What Are The Effects Of Sleep Apnea? 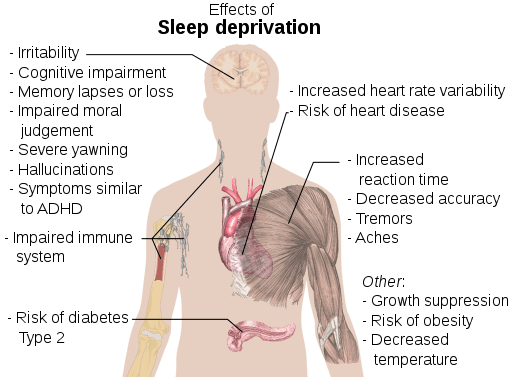 Low oxygen levels can cause many other symptoms such as headaches and dizziness and can also cause increased adrenaline levels which can cause high blood pressure. Many other symptoms stem from the chronic sleep deprivation associated with sleep apnea. This can cause stress, anxiety, gastrointestinal disturbances, pain syndromes, generalized fatigue, decreased immune system function, and many other symptoms. In fact, it has been said that the effects of sleep apnea are so varied that it can masquerade as almost any other medical disease.

How Do We Detect Sleep Apnea?

Sleep apnea diagnosis is traditionally done with a sleep apnea test, or sleep study.  Sleep studies have historically been performed in a dedicated sleep lab.  The patient sleeps one full night in a sleep lab while they are connected to many different monitors, including heart monitors, oxygen monitors (spo2 monitors), chest wall motion monitors to detect breathing (breathing monitor), and a full EEG monitor (electroencephalograph monitor which measures brain waves in order to detect the stages of sleep) which has many wires connected to the scalp. You can imagine that it is a bit difficult to sleep with all those wires attached to one’s body, but that is how the test has most often been done.

With the advent of better and more compact sensor technology, it has become possible to do a home sleep test.  These sleep studies use less wires, often only a sticker to measure chest wall movement and a finger sensor to measure oxygen level and heart rate, in order to detect sleep apnea. Because these home sleep studies lack a full EEG monitor they are unable to conclusively show the stages of sleep. Instead, body motion sensors can be used to infer the sleep stages. This works because body movements can be correlated with different stages of sleep. For example, because we are effectively paralyzed during REM sleep there will be no body movement during a REM sleep cycle. Conversely, during the lighter stages of sleep we often will shift position in the bed from time to time. In this way, a relatively accurate sleep report can be generated from a much smaller array of sensors, and this can be done with the patient sleeping at home in their own bed.

The CSMW is a multi-sensor array all contained in a simple watch format.  Because it has sensors which can measure blood oxygen level (SpO2 monitor), body movement, and respiratory rate (breathing monitor), it is able to perform home sleep studies.  Instead of applying stickers, wires, or finger clips, the patient simply has to wear the CSMW to bed at night. This can be useful for more than just the initial diagnosis of sleep apnea. Because the CSMW can be worn as many nights as one wishes, the data can be used to track the severity of a person’s sleep apnea and its response to treatment. And because sleep apnea can contribute to atrial fibrillation, the CSMW may be used both as an afib monitor and at the same time as an SpO2 monitor, vital signs monitor and sleep apnea monitor to give a complete picture of a person’s sleep apnea status

*Some of the features are not regulatory approved yet
Menu