What is Oxygen Saturation?

The blood in our body carries oxygen from the lungs to all parts of the body.  Our blood is composed mostly of water.  The simplest way to carry oxygen in a fluid is to simply have the oxygen dissolved in the fluid the same way that sugar or salt can be dissolved in water. However, because we humans are such active creatures with such high metabolic demands, not enough oxygen can be dissolved in our blood to meet our needs.  Our bodies have therefore developed a method to increase the oxygen carrying capacity of the blood. This ingenious method utilizes a special molecule called hemoglobin. Each hemoglobin molecule is composed of four separate heme units and each heme unit requires a single atom of iron. One complete hemoglobin molecule can carry four molecules of oxygen – one in each heme group.  The iron in the hemoglobin molecule produces a red color, the same way iron in the earth or in rocks gives them a reddish hue.  The hemoglobin in our blood does not float free in the blood stream. Instead, it is packaged inside cells.  The red color of the hemoglobin gives the cells a reddish color and they are therefore called red blood cells. The red blood cells are suspended in the water base of the blood, called plasma, which also has many other types of cells, proteins and electrolytes dissolved in it. If all the red cells were removed from the blood, the remaining plasma would no longer be red. It would simply be a clear to straw colored fluid.

One can do a blood test to see how much oxygen the blood is carrying. This 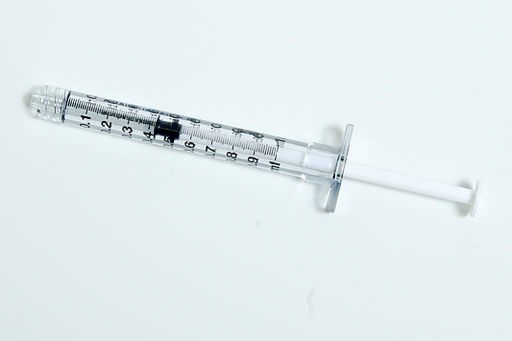 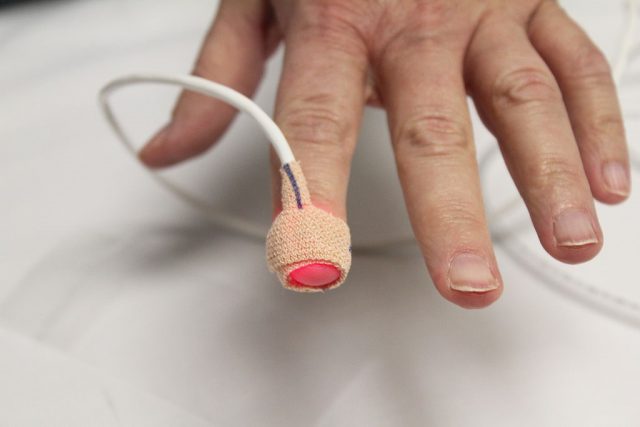 Another advantage of a pulse ox monitor over an arterial blood gas is that the blood gas test is a spot check which gives an answer only valid at the point in time at which the blood sample was taken. In contrast, the pulse oxygen saturation meter can measure the oxygen saturation percent continuously. Most over the counter finger-clip type blood oxygen monitors have an automatic mode where they automatically turn on when you place your finger in the clip. 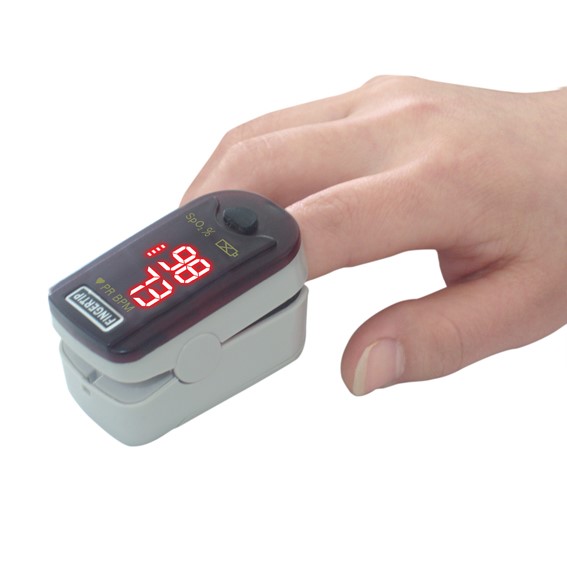 They will then display the result for a few seconds and then automatically turn off in order to conserve battery power. Currently, the CSMW functions as a spot oxygen saturation monitor, (although it may gain continuous functionality in the future.) Because most SpO2 monitors are finger clip monitors, you cannot use your fingers or hand while the monitor is on your finger. The CSMW allows you to wear the oxygen monitor all day long without interfering with your hand or fingers. Thus, you are able to measure your own SpO2 throughout the day whenever you wish, wherever you are, and whatever you are doing.

Because the amount of oxygen in our bodies is so important, our normal arterial oxygen saturation is between 95-100%. Various disease states such as heart failure, chronic lung disease, or sleep apnea can lower the blood oxygen saturation. Usually, anybody who has an oxygen saturation less than 89-90% will require supplemental home oxygen in order to raise their blood oxygen levels back into the 90s. If oxygen levels decrease into the 80s or 70s severe symptoms will occur, including visual changes, dizziness, mental status changes, lack of awareness, trouble thinking, and others. Oxygen saturations below that for any prolonged period of time are deadly.

Heart failure, chronic lung disease or sleep apnea can be monitored by following the oxygen saturation over time, as well as by measuring other parameter available on the CSMW such as pulse rate and respiratory rate. Together, these measurements can help diagnose new problems as well as catch exacerbations of these diseases before they become serious. It is one thing to be able to spot check your oxygen saturation from time to time with a pulse ox monitor, if you remember to take the finger clip with you and if you remember to put it on; but it is quite another to have the security of knowing that you can check your saturation any time you want without any extra equipment other than the watch on your wrist, and that the information can be automatically forwarded to your personal physician for review.

*Some of the features are not regulatory approved yet
Menu